In Logroño you can visit the cellars that since the Middle Ages and the Renaissance have been used for the production and aging of wine.

The oldest streets of the city still preserve many of its centenary underground cellars or calados, such as the one found at the headquarters of the Colegio Oficial de Ingenieros Industriales de Aragón y La Rioja (COAR), with its famous well from which the building takes its nickname: la Casa del Pozo (the House of the Well).

This building, with its five hundred years of history, has witnessed the lives of the people of Logroño since its many uses as a palace, farmyard, wine cellar, bread bakery, forge, convent, fabric warehouse, dye shop, school, neighborhood community…

Its construction was commissioned in 1537 by Alonso de Viñaspre, a wealthy family at the time, and in the 19th century the architect Maximiano Hijón gave it its current appearance.

In 2021 has been announced the next restoration of its facade and dovecote, from which you can see a spectacular panoramic view of the Old Town of Logroño.

Calados: some houses had an ashlar stone construction below ground level, like the one used in churches and cathedrals, with a half-barrel vault also built with ashlars. Here the family unloaded the grapes and left them to ferment in the lagar, a kind of tank usually made of stone.

When you walk through the Ruavieja, Barriocepo or other streets of the Old Town, notice a kind of vents that the stone walls have at ground level. We call them tuferas.

When the wine fermented in the lagar, by what is known as carbonic or tumultuous maceration, it produced a great increase in temperature and carbon monoxide was released.

This gas could cause a dangerous accident at work, which in La Rioja is known as sweet death: poisoning by asphyxiation caused by the fumes without any prior warning sign, causing the artisan in the winery to faint. Hence the importance of ventilation vents or tuferas. 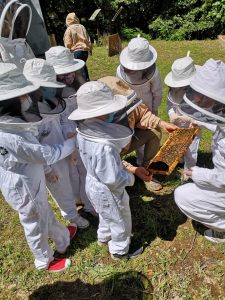