The Rioja Culture Center is located in the heart of the Old Town of Logroño. It occupies a whole block, between Mercaderes, Ruavieja and Marqués de San Nicolás streets, and is built on the remains of the old Palace of the Yanguas, also know as House of the Virgin, from the16th century. The new building maintains part of its old architecture, combining it perfectly with an innovative and avant-garde construction.

Its high cultural and artistic heritage value make it unique. Its surface area of more than 3,000 square meters, distributed over four floors, masterfully combines avant-garde architecture with that of the Renaissance, integrating innovation and avant-garde with the historic walls of this old palace.

The different floors of the building are communicated by a beautiful palatial staircase which has been rebuilt with great fidelity and which acts as the backbone of the building. In the basement you can find the great medievalcalado (underground cellar); innovative, professional tasting rooms and multiple rooms for the wine museum and its exhibitions, including a big atrio for wine events and conventions.

Its main façade is dominated by the most representative element of the building, a giant glass wine rack which occupies two of the building’s facades and which is, without a doubt, the identity symbol of this museum. In addition, its polyvalent translucent roof is a daytime skylight for the atrio (big courtyard), the heart of the building, which offers easy access from three streets and serves as a multipurpose hall.

The archaeological tastings carried out prior to the construction of the new building made visible an important number of wine infrastructures in its subsoil of great interest and value for all visitors to the museum: drafts, wineries, silos, presses, amphorae, vessels, glasses … These objects have been integrated into the project to be enjoyed by the public.

The Rioja Culture Centre (Centro de la Cultura del Rioja or CCR) is a municipal facility whose mission is to promote the Rioja wine culture worldwide.

Located in the heart of Camino de Santiago, between Ruavieja, Mercaderes and Marqués de San Nicolás streets, Rioja Culture Centre forms together with the Calado of San Gregorio and the Lagares space the golden triangle of wine tourism in Logroño.

This building was chosen in respond to the European initiative for urban regeneration by which the City Council of Logroño, through the project “An old town for the 21st century”, promoted in 2007 the rehabilitation of the heart of the historic center of the city. Its objective was to promote the creation of residential and cultural areas associated with the Rioja wine culture. The architectural project selected for the construction of the Center was presented by the architecture studio of Jesús Marino Pascual & Asociados.

Its architectural intervention, in one of the most distinguished houses of the 16th century and in which the influential family of merchants of the Yanguas lived, offers a spectacular volumetry, after the expansion of the adjacent lots, defined by a three-story glass bottle rack high that covers its more than 3,500 m2. The building has excellent facilities and a surprising translucent roof that shelters wineries and ashlar stonework openings along with modern professional tasting rooms.

Historic calados that still mark the excavated subsoil of the old town of Logroño, where its inhabitants lovingly elaborated and kept the fruit of this land for centuries. 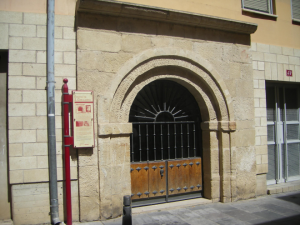