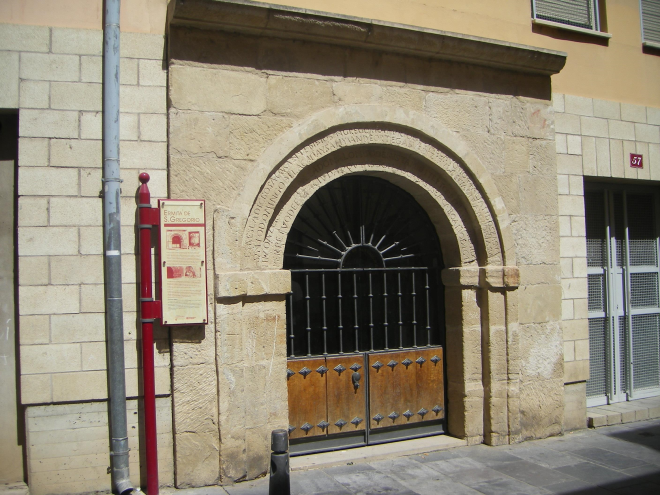 The Camino de Santiago enters the city of Logroño through Ruavieja street, where you can find the hermitage or chapel of San Gregorio, practically rebuilt in the same place where the previous one was.

The old building was built in 1642, in the space occupied by the house that, according to tradition, served as the saint’s residence. In 1038, Pope Benedict IX sent Saint Gregory, bishop of Ostia (Italy), to La Rioja and Navarra to put an end to locust plagues that were ruining crops and causing great famines in the population.

After blessing the fields and ending them, the saint began a pilgrimage to Santiago de Compostela, accompanied by his disciple Santo Domingo de la Calzada. Upon his return, he died on May 9, 1044 in this house.

The old hermitage was a small construction, made of ashlar masonry, with a square floor plan, covered with a groin vault. It was dismantled in 1971, after the collapse of the roof a year earlier, and the Logroño town hall conserved the ashlars corresponding to the façade. All the pieces that decorated it were donated to the Museum of La Rioja by the family that owns the chapel.

Years later, the entire housing area on Ruavieja Street was rebuilt, reserving the space it had previously occupied for its relocation. Thanks to the intervention of the Rotary Club of Logroño and the City Council, it was rebuilt and inaugurated on May 9, 1994, the feast day of San Gregorio.

The original masonry façade was assembled here, with a semicircular arch door with two archivolts, on which the following inscription can be read: Inside, there is a canvas of San Gregorio, from the previous hermitage, which it was restored by the Rotary Club of Logroño. It is a baroque work from the mid-seventeenth century.

Members of the Brotherhood of San Gregorio carry out free guided tours of the Hermitage or chapel of San Gregorio every first Saturday of each month from 10:00 a.m. to 2:00 p.m. Advance reservation is not necessary.