The history of Logroño: bridge to bridge

As is the case with any city that stands on a river, in Logroño there are lots of opportunities to enjoy both green areas and monuments, starting with the bridges themselves that allow you to cross from one side of the Ebro to the other. Each has its own story, its past and its future intertwined with each of its arches.

Cities through which rivers flow have something special, a rhythm marked by the seasonal rise in the waters, the mists that appear in winter, and the birds that nest near the river banks in summer.A river can be a water clock, but it can also be both a frontier and a path, as is the case of the Ebro.

As it passes through Logroño, it curves around as if to embrace the town, but this gesture of affection actually splits the city in two, which led to the need to build bridges. ‘Logroño’ is derived from the Celtic word ‘gronio’, which means ford; here there was a stretch of more shallow water where it was possible to cross without being swept away by the current.

This site may have been the site of the Mantible Bridge, a 2nd century Roman construction, although some researchers who have studied the remaining rounded arches (there were once six of these), consider it to have been constructed at a later date.

The remains of the bridge are located on the dividing line between the provinces of Álava and La Rioja, where two important Roman roads used to meet. There is little to see today, as unfortunately it collapsed during a recent flood, but it is still a good excuse for a pleasant walk through the vineyards on the outskirts of the city.

Furthermore, there are plans to rebuild it in the near future. On the way back, moving eastwards, you will come to the Práxedes Mateo Sagasta Bridge, a contrast in style. This one is dedicated to the memory of a politician from La Rioja who was famous during the Spanish Restoration.

Popularly known as ‘the fourth bridge’, it is a suspension bridge that was built in 2003, and has a span of 140 metres from bank to bank.

A suspended structure supported by steel braces was used in the construction, and in the bright midday light it looks like an arch that is about to burst. The route continues between viaducts, arriving at an odd pedestrian footbridge that curves over the Ebro on its way to the opposite bank.

It has been there since 1986, and serves to link the green area of the Ebro Park with various leisure and sports facilities in the north of the city, avoiding the nuisance of negotiating the traffic. 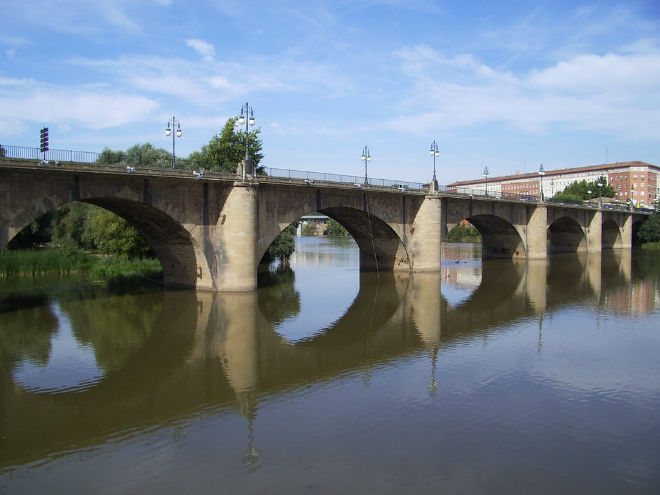 However, the most interesting thing is the decoration painted at both ends, as if it were an open-air museum.

You will find several murals that were created during the city’s 2nd Urban Art Festival in 2017 there waiting for you.

From the centre of the footbridge, you can already sense another construction waiting for you around the next bend in the river: the Iron Bridge, built in 1882. Alfonso XII was king, and the dynastic parties were alternating in power.

Sagasta, who led the liberals, was the force behind this much-needed drive to improve Logroño’s trade relations with the north of the country.

Engineer Fermín Manso de Zúñiga was the one chosen to create the ironwork, and he devised a way of spanning the 330-metre width of the river at this point.

The same man would be in charge of reforming the structure of the last of the bridges, the one you will find a few metres further on.

Logroño’s Stone Bridge is a symbol of the city, but the bridge that can still be seen on its coat of arms is a different shape to the current one.

The original is believed to have been built in the 11th century; it had twelve arches and was known by the name of San Juan de Ortega, as the chapel dedicated to the saint who was the driving force behind its construction stood on the left bank.

The bridge also had three towers, one in the centre, and one at each end. But the force of the water and the passage of heavy artillery during lengthy wars caused it to deteriorate, and later to collapse.

Manso de Zúñiga was commissioned to rebuild it while he was still busy with the Iron Bridge, but he managed to complete the work in 1884, removing the fortifications and creating a stronger bridge with seven taller, wider arches to replace the original twelve, and one that would permit increased rates of flow.

It coincides with the Way of St James, so that anyone arriving in Logroño on foot will find it waiting to welcome them. In fact, at the beginning of the Stone Bridge there are two ‘fielatos’, one of which is used as an information point for pilgrims.

‘Fielatos’ were the huts or constructions where the old municipal tax guards were housed, taxes on goods collected, and health controls on foodstuffs carried out before they were allowed to enter the city.

The old bridge disappeared under the waters together with its customs, but its memory lives on in a work that is, more than ever, an outstretched hand and a meeting point.